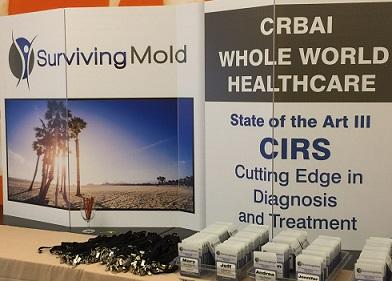 The "CIRS - Cutting Edge In Diagnosis and Treatment" event was held October 14-16, 2016 in Irvine, CA.  It was based on the work of Dr. Ritchie Shoemaker, MD.  Dr. Shoemaker has changed many lives by bringing attention to the problems that water-damaged buildings create for health in those that are genetically-susceptible.  Over time, it has become clear to me that Lyme was a relatively small issue as compared to mold illness in my own personal journey.  It has also become clear to me that if one has both of these issues in play, addressing the mold exposure should be a top priority.  Without doing so, it is unlikely that one will make significant progress with their overall treatment.

While this event should have been ten times the size given the magnitude of the problem, it is great to see so many practitioners taking up the torch and incorporating mold treatment into their patient work.  The certified practitioner list is still smaller than what can meet the need, but I am very pleased to see the caliber of the people that are becoming experts in this work.

We are very fortunate that Dr. Shoemaker's work is well-organized for us with many resources at SurvivingMold.com.  All of the lectures are available for purchase as well and I recommend empowering yourself with knowledge and exploring these resources further.

Chronic Inflammatory Response Syndrome is known as CIRS.  It is pronounced "sirs", not "sears".

Keith Berndston, MD spoke on "What is CIRS?" and shared:

Mary Ackerley, MD spoke on "Brain on Fire: Neuroinflammation and CIRS" and shared:

Megan Doyle, JD spoke on "Yoga and CIRS" and shared:

Larry Schwartz, CIEC spoke on "To Move or Not to Move...That Is The Question" and shared:

Michael Schrantz, CIEC spoke on "A Mold Safe Home Assessment Through Virtual Boots on the Ground" and shared:

Michael Schrantz, CIEC and Mary Ackerley, MD spoke on "It Takes a Village" and shared:

Ritchie Shoemaker, MD spoke on "NeuroQuant and Therapy" and shared:

Another panel discussion shared these thoughts:

Scott McMahon, MD spoke on "Experience with the First 6 Years" and shared: