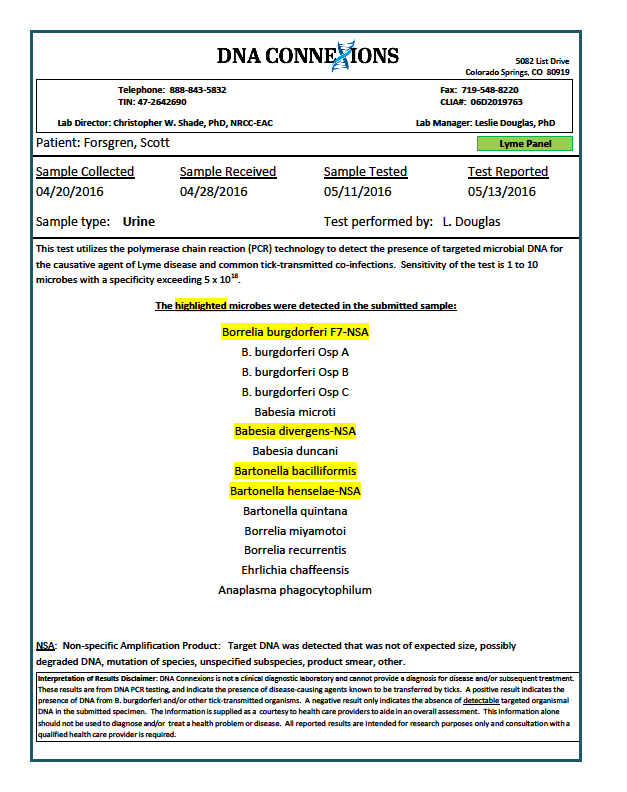 I had heard about a lab called Dental DNA some years ago.  Dental DNA was originally the result of hero Dr. Hal Huggins DDS's work and had a test to evaluate different microbes in root canals.  Several years ago at a conference, I learned that they also had a test for Lyme.  Dental DNA evolved into what is now DNA Connexions.  They are a CLIA-licensed laboratory.

DNA Connexions offers a Lyme panel that looks for Borrelia, Bartonella, Babesia, Ehrlichia, and Anaplasma in a single urine sample.  An advantage of this test over some others is that it is looking for antigen DNA and not reliant on an immune system response which often leads to false negative results.

DNA Connexions Lyme Panel has recently been discussed by Dr. Dietrich Klinghardt MD, PhD as a test that he has found very helpful in working with his own patients at Sophia Health Institute as discussed in a recent Townsend Letter article.  Dr. Klinghardt has found that the test results are more sensitive if someone does the urine collection after a deep-tissue massage, rolfing session, or similar.  My understanding is that very few people suspected of having Lyme come back entirely negative on this panel.

I decided to do the test myself.  While I have not had any notable symptoms of Lyme or co-infections for many years and have not had any indication of these microbes come up in energetic testing with several practitioners for some time, they were still detectable in the urine PCR test panel.  Borrelia, Bartonella, and Babesia were all identifiable.  This is in line with what I have thought about Lyme for some time; namely that we do not have to eradicate every last Lyme-related bug to feel healthy and regain a state of good health.  Some people may successfully clear these organisms, but it is not a requirement of recovering.

A similar analogy exists with the chicken pox virus (Herpes Varicella Zoster).  Many may have had chicken pox as a child, but they don't have symptoms of chicken pox for life.  However, the virus itself doesn't go away and later in life, under periods of stress, one may develop Shingles from the same virus.   That's very much aligned with how I think about Lyme.  I don't think it is the organism that causes the disease.  It is how our body responds to and interacts with the organism that makes the difference.

This is not to suggest that antimicrobial treatment is not needed.  If there is an overgrowth of these organisms in the body, these therapies are very helpful.  However, the bigger question is what led to the imbalance in the first place.  In my opinion, these are things like toxicity, emotional burdens, stress, living in a moldy environment, etc.  Recovering from Lyme is about creating balance in our lives and doing everything we can to remove those items that are stressful to the body and to incorporate more of those items that are supportive of health.

If you are interested in the testing offered by DNA Connexions, a list of practitioners using their assays can be found here.   Many of these appear to focus on the dental panels as that was how they started.  For the Lyme Panel, my understanding is that the test can be ordered without a requisition from your doctor by ordering a test kit.

If you explore this yourself, I'd love to hear from you.  Please feel free to Contact Me.