In 1997 in my twenties, I became violently ill.  It was the scariest thing I had ever experienced.  Overnight, my body was ravaged by an unknown illness.  I had difficulty walking, balance problems, blurred vision, low-grade fevers, rapid heart rate, burning sensations in my arms and legs, severe joint pain, nausea, digestive disturbances (we'll leave it at that), brain fog, muscle spasms, numbness, tingling, skin-hypersensitivity, motor-like tapping sensations in my hands and feet, and never-ending fatigue.

Doctors and health-care professionals were baffled.  They suggested that I had Epstein-Barr virus, Mononucleosis, Fibromyalgia, Multiple Sclerosis, severe allergies, Chronic Fatigue Syndrome, and of course, even that it was all "in my head".  I cannot count the number of times I was referred to a psychiatrist.  Though I will readily admit to the reality that I probably do need one, it had nothing to do with my physical health.  (read as "Scott has sense of humor")

After 27 doctors and nine months of feeling as though I had the flu everyday, I was diagnosed with multiple parasitic infections including Blastocystis Hominis, Giardia Lamblia, Cryptosporidium, Entamoeba Hystolytica, and others.  I was also diagnosed with severe Candida resulting from antibiotic overuse from several previous doctors.   Additionally, I had Leaky Gut Syndrome and severe food allergies.

I tried so many different things to get well.  I received mega-doses of vitamins through IV.  I administered coffee enemas.  I was "smudged"

by mystic healers.  I gave up wheat and fruit products for years.  I gave myself regular injections of vitamins to help with the malabsorption resulting from the infections.  I even went to one doctor that claimed that I was ill due to a virus found in Crystal Geyser bottled water (which of course never existed).  I took EPD (Enzyme-Potentiated Desensitization) shots every two months to help desensitize and heal my immune system.  The EPD treatments required three days of staying at home eating nothing but potatoes and water.  Oh, how I loved that.  The list of things I tried went on and on...

For more details, see the article written about my ordeal in Life Extension Magazine in June 2000.

My journey back to health took the next two years and careful coordination with my doctor, Jesse Stoff, M.D., one of the brightest and caring scientists I have ever had the pleasure to know.  I learned many things along the way.  Once I recovered, I never thought that another difficult to diagnose illness could strike again, but it did! 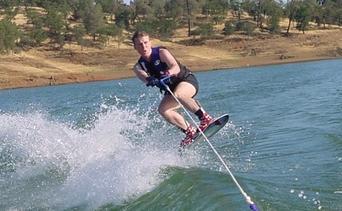 After having recovered from my first bout with chronic illness which started in 1997 and lasted through 2000, it seemed as though everything was headed in the right direction.  I was running 10Ks with solid times.  I was wakeboarding, snowboarding, swimming, and doing Bikram yoga on a regular basis.  Except for some ongoing allergies, as time progressed, I stopped identifying as "ill" and once again felt as though I had attained exceptional health.

Unfortunately, my regained health was not to be taken for granted.  In September of 2004, I started having severe digestive difficulties (you name it, I had it) once again.  Within six weeks, many of my original symptoms reappeared including severe burning sensations in my arms and legs and muscle twitches throughout my body.  It seemed that I was revisiting the nightmare that I thought was finally over.
Dr. Stoff, who had helped me through my first bought with chronic illness, was no longer practicing as he had moved full-time into research.  He did, however, refer me to a doctor that he consulted with nearby my home.  I was subsequently diagnosed with probable parasitic infections, Leaky Gut Syndrome, Candida, and multiple food allergies.  It seemed all too familiar, and yet, it was no less frightening.

The piles of medical bills and test results once again reached significant proportions.  I was treated for parasitic and fungal infections with a month-long combination of drugs.  The parasitic testing this time did not show any active infection though this seemed the logical course of action given my almost identical symptoms.  I began to feel better, but about a month after the treatment ended, the symptoms reappeared.  I was subsequently put on another combination of drugs for 28 more days. This combination seemed to have made some progress as many of the symptoms improved.  At that point, I thought I was starting my road back to recovery.  Well, I was wrong...

In summer of 2005, I started a new therapy to help with the severe food allergies called BioSET™.  At this point, I was unable to eat milk, cheese, yogurt, eggs, soy, wheat, oats, barley, or rye.  I found that I was not only allergic to foods, but I was also allergic to the very supplements that I was taking to get well.  It was an amazing process to see how BioSET™ works.  On my very first appointment, the practitioner said that I likely had Lyme disease and numerous co-infections, specifically naming Ehrlichiosis, Bartonella, and Babesia.  I went back to my MD and asked for tests to be run for Lyme.  The blood tests did in fact show a high IgG titer for Ehrlichiosis and an equivocal result for Lyme via IGeneX Western Blot.  When this happened, I was even more convinced that energetic medicine is real and that it can do amazing things for people.

Shortly thereafter, I went to a doctor that specializes in Lyme-related conditions and was given an official diagnosis of Lyme Disease. My subsequent blood testing showed infection with Borrelia burgdorferi, the main culprit in Lyme Disease.  I also showed exposure to Bartonella and exposure to Babesia was also confirmed.  With my previous Ehrlichia diagnosis, I now had all of the common Lyme disease co-infections, and guess what?  I didn't even get a T-shirt or a certificate!

I started down the road for the treatment of Lyme and have every expectation that my situation will continue to improve.  As of late 2012, I am back to about 90% of my former self.  I still treat aggressively though I have been off all antibiotics now for four years.  I still have some distance to travel, but I hope that my experiences will be of value to you.  I've learned so many things on this journey and I hope to be able to share a few of them with you here.

Please visit the Lyme Disease section of the site for more details on this often challenging and misunderstood condition.