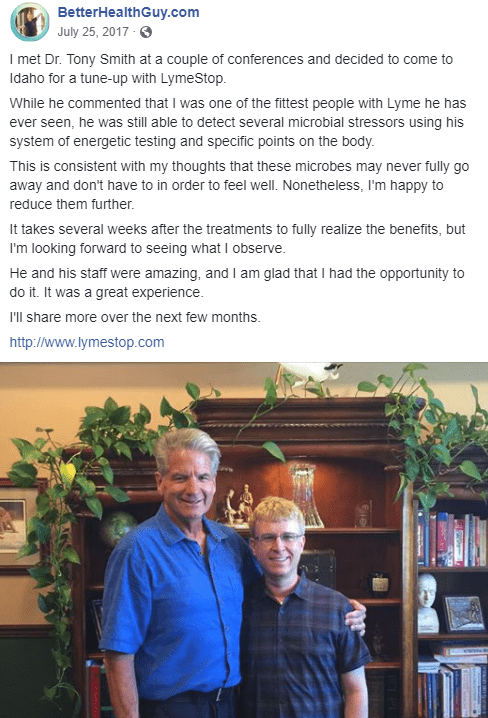 LymeStop is a healing system that was created by Dr. Tony Smith, DC in Idaho.  It uses gentle therapeutic magnets applied to the body to stimulate the neuro-immune system and create a recognition of a specific microbe which allows the body to properly respond to it.  It teaches your own immune system how to more appropriately respond to a microbial stressor such as Borrelia, Bartonella, Babesia, and many others.

I had come across this system years ago, but was already what I considered beyond my Lyme disease days and doing very well with an ongoing herbal maintenance program.  I met Dr. Smith at two conferences, and he suggested I come to visit his office and be treated; as he was still able to find Bartonella with his system of testing at one of those conferences.

My first visit was July 2017 and is best summarized in my original Facebook post which is shared in this article.  At that time, he was still able to find numerous microbial stressors related to Lyme (and others including parasites, fungi, and viruses); even though I was doing very well at the time.  He did treat me, and I had a detoxification reaction that lasted for about two months.  It was tolerable, but it was clear to me that LymeStop had done something.  I can't say that I felt any better because I didn't feel poorly when I first saw him, but I was able to stop maintenance antimicrobials for the first time in many years, and that alone was very positive.

When I went back for the follow-up in November 2017, very little was still showing up.  He still found some parasites, a virus, and an isolated area of Borrelia remained.  I was treated for those and given the all clear with planned future appointments only if needed.

Shortly after my LymeStop visit (and unrelated to LymeStop), I had a very strong negative reaction to a metal chelator and broke out with a full body rash unlike any other I had experienced.  Within a few weeks, I then started having some intense cold sensations deep in my body.  Even the breeze on my face felt like frost-bite at times.  I had never experienced this previously, and it did not feel familiar.

Around the same time, I had some positive hypercoagulation panels, and a Lyme expert suggested metals or infections were common triggers of thickened blood, and these types of sensations could be related.  I worked on additional metal detoxification, but the sensations continued. I was not at that time testing energetically for stress related to any microbes or any potential benefit from antimicrobial herbs.

Finally, in May, I saw my naturopath and, using ART (Autonomic Response Testing), I did start testing for Babesia-like and Bartonella-like stress.  These had not been an issue for me for 5+ years at that point.  I started back on antimicrobial herbal support and simultaneously reached out to Dr. Smith.  The sensations started improving almost immediately being back on the antimicrobial herbs and using Boluoke.

Dr. Smith suggested I return to Idaho and get tested and potentially re-treated.  In late June 2018, I saw Dr. Smith, and he did pick up on Borrelia, Bartonella, Babesia, Mycoplasma pneumoniae, Chlamydia pneumoniae, and five common Lyme-related viruses.  Interestingly, other issues such as larger parasites and Candida, were not an issue.  This is a pattern that he commonly sees with those who get reinfected with what he calls the “Lyme package“. His conclusion was that I was likely reinfected.

Fortunately, the list of issues identified with his testing was still much smaller than when I saw him in July 2017, and I was fortunate to have been able to get back so quickly to see him and be re-treated.

In November 2018, I went back for a follow-up with Dr. Smith.  This was my fourth trip to his office in the past 18 months.  Fortunately, he was no longer seeing Bartonella, Babesia, Mycoplasma, Chlamydia, or the Lyme viruses he had identified in June.  He was able to detect some Aspergillus (I had just spent a week in an older hotel at a conference), parasites, a virus impacting the hypothalamus, and an isolated area of Borrelia, and a need for gallbladder support and iodine.  I was pleased that he was no longer able to detect the co-infections and that things looked quite good overall.  I am not scheduled to go back unless something shifts with how I'm doing in the future.  Overall, I'm feeling like things are back on track after an unexpected detour.

At this point, I do believe that LymeStop can be a very helpful tool.  I wish I had explored it years earlier when I was still struggling with Lyme and may have had even more notable benefits.  Dr. Smith and his team are amazing and caring people, and I do think that incorporating work in the realm of bioenergetics (such as through LymeStop and other physics-based approaches) can be very powerful tools in recovering optimal health from a complex, chronic illness.

Very little in the realm of Lyme disease is a given or a perfect solution for everyone, but I personally value and appreciate that LymeStop is an option available to us and encourage those interested to explore further.

You can learn more about LymeStop in my earlier podcast interview with Dr. Smith or in Connie Strasheim's book.

Update August 2021: It is not uncommon for me to be asked whether or not I think LymeStop is a good treatment option. I decided to summarize my thoughts here so that they are available for others to review as well.

In my personal journey, I was already 90% or more recovered when I first went to do LymeStop. I can't say that I felt a significant difference after doing it, but that's true of most things that I have done in the past several years. It was much easier to see progress when I was at 10% than when I was at 90%.

Thus, while I am not able to say LymeStop was a game changer for me personally, sometimes I have to consider other factors beyond my personal experience alone.

I have talked with numerous people that have had very positive experiences with LymeStop. While nothing works for everyone, I am impressed by how commonly people do find relief after having done the program.

I think it is important to consider that no single intervention is likely to solve all of the contributors to chronic illness. For example, while I understand that there have been some advances in the past couple of years with LymeStop in the area of mold and mycotoxins, I have not found any tool yet that will resolve chronic illness if one is in an environment that exposes them to mold and other biotoxins on a regular basis.

Like many, I have limited travel during the pandemic, but I am very open to another follow-up with Dr. Tony and his team in the future to see what his testing still shows and to take advantage of some of the latest developments in the LymeStop system.

Overall, I continue to be impressed by LymeStop and the work that Dr. Tony and his team are doing to help many that work with them.