Miso and Cilantro Soup for Detoxification 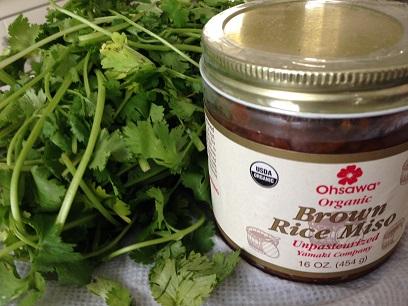 At one of the recent Dr. Klinghardt lectures that I attended, Dr. Klinghardt talked about the importance of detoxification.  He has talked about aluminum as a heavy metal toxin that impacts our health negatively and should be considered as part of a detoxification program.  The combination of mercury and aluminum is far more detrimental to our health than either alone.  Aluminum is also one of the metals that can be more difficult to detoxify than some others.

Based on the work of Dr. Omura, it was discovered that cilantro was an excellent option for detoxification of heavy metals in the body.  Interestingly, he also found that the removal of the metals with the cilantro aided other antimicrobial therapies that may be used.  More on his findings can be found here.

Miso itself has several great health benefits including containing essential amino acids and serving as a complete protein, supporting digestion, restoring beneficial flora, supporting the lymphatics, protecting against radiation, and supporting the immune system.  For those of us on the West coast, additional measures for radiation detoxification may be prudent after recent radiation leaks in Japan.  More on the benefits of miso can be found here.

As a result of the benefits of both cilantro and miso, I have personally started using miso and cilantro soup nightly before bedtime to support detoxification.

How I Make It: First, I boil water.  While the water is boiling, I chop up the cilantro (a large handful).  Once the water boils, I add the cilantro and let it steep for about 10 minutes.  I then let it cool and when it is just mildly warm, I add 1 tablespoon of organic miso paste and drink it.  The recipe from a recent Klinghardt conference can be found here.

I'll be honest and say that I don't like the taste of the soup.  I love cilantro, but miso is not my favorite.  Nonetheless, I have done many things to recover my health that I didn't like, and this is certainly not the worst.