One of my biggest challenges with recovering my health has been mold.  It is no secret that I struggled with mold illness that led me to once leaving my home in order to create an environment that was more conducive to healing.  Then in 2015, I was exposed to mold again on a regular basis.  I felt my overall health on less stable ground and felt my inflammation levels increasing.

I had done RealTime Laboratories urine mycotoxin testing in 2013 and it was very good.  At the suggestion of one of my practitioners, it was suggested that I repeat the test in late 2015.  To my surprise, I was HIGHLY positive on both Ochratoxin and Gliotoxin.  Aflatoxin was not far from being considered positive and similar for trichothecenes.  These results as compared to my results from 2013 were a major red flag.

I don't think that urine mycotoxin testing is a single test done in isolation.  I think it is one of may things that may be helpful when mold is suspected.  I absolutely suggest the Mycometrics ERMI as well as all of the standard Shoemaker biotoxin illness markers such as TGFb1, C4a, MMP9, MSH, and others.  The urine testing is, in my opinion, one more indicator; one more piece of a complex puzzle.  I know that not everyone likes it.  I know that the test is questioned as some suggest that urine mycotoxins would be expected normally if one ate foods that were moldy.  That may all be true, and yet, my personal experience was that this was a HUGE help.

Going from excellent results in 2013 to very poor results in 2015 was eye opening.  These results, combined with other tests as noted above, supported that mold was once again leading to health challenges that needed further exploration.  I left the environment where I was getting exposed.  I started several binders.  I started nasal antimicrobial sprays.  Essentially, I am following a protocol very similar to what was outlined in my Townsend Letter article with mentor Neil Nathan MD here.  I still have more work to do, but the numbers support that I am back on track.

I started treating for mold in December 2015.  I left the environment in January 2016.  Within 6-8 weeks, I felt my inflammation notably improving.  Some days it was 90% better.  In April 2016, I repeated the RTL urine mycotoxin test and not a single mycotoxin was now considered "present".  This correlated to how I was feeling as well.

I understand that there are some questions as to the usefulness of this type of testing.  Constructive debate is a good thing.  For me, these results led me down a path of action that has been a powerful forward step.  As such, I am grateful that this tool is available.

Note below the October 2015 mycotoxin levels as compared to the April 2016 levels.  What a difference! 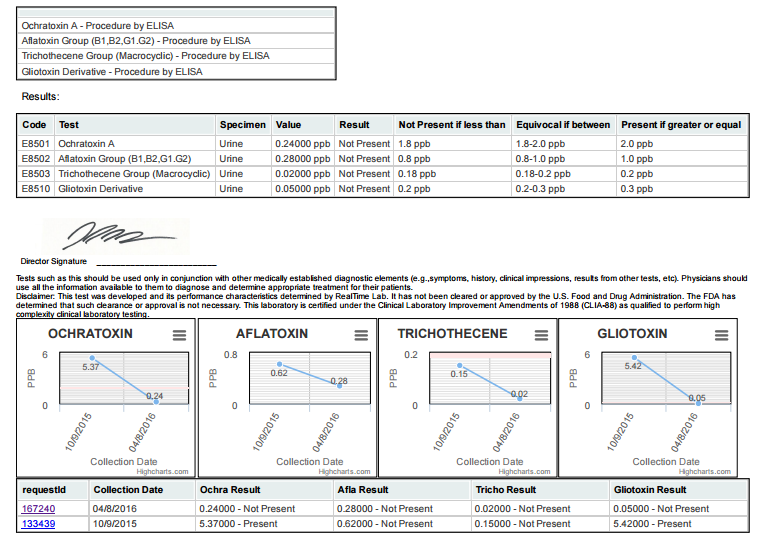