Throughout my Lyme journey, it has become apparent to me that if one can learn how to treat autism, one can treat Lyme disease.  I am not suggesting that 100% of cases of autism are caused from Lyme disease. However, I do think that enough of the children diagnosed with autism do test positive for Lyme disease that it is worth in-depth investigation.  I'm also suggesting that both conditions are the result of genetics, toxicity, and infections.  Thus, learning how to treat one certainly has application to the other.

Autism is a complex disorder that may have a number of different causes.  Here are some of my thoughts on likely causes of autism:

1) Mercury and other heavy metals - I think this is likely the #1 concern that needs to be addressed in any child with autism.  I have seen enough information presented at various conferences and in discussions with numerous autism-treating doctors to arrive at the conclusion that the most important thing to address in treating autism is often heavy metals.

2) Vaccinations can be a component involved in autism both in that some children have vaccination reactions whereby the vaccine itself stimulates the immune response in an undesired way as well as the fact that many vaccinations today still contain thimerosal as a preservative.  Thimerosal is a form of mercury, thus resulting in the likelihood that the vaccinations are adding to the heavy metal problem mentioned above.  Those that do not contain mercury-derivatives often contain aluminum which research is beginning to show might be even worse.

4) Genetics influence the way that the body detoxifies from heavy metals and other toxic substances.  A genetic evaluation can be useful in understanding potential contributing factors in autism and suggesting mechanisms for bypassing genetic mutations.

5) Environmental stressors such as electromagnetic fields and living in a home with ongoing mold exposure can add significantly to the total body burden.

6) Food allergens such as gluten in wheat in other products as well as casein in dairy products can have negative impacts on the brain and neurological system.

Some resources that I highly recommend to help better understand autism are:

A good book by Dr. Kenneth Bock which I have read and highly recommend is:

Healing the New Childhood Epidemics: Autism, ADHD, Asthma, and Allergies: The Groundbreaking Program for the 4-A Disorders 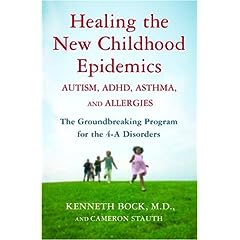