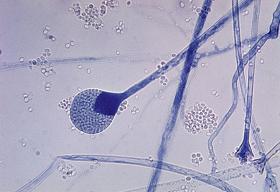 Most people think of mold as something that grows on your expired cottage cheese in the refrigerator or even something that has beneficial effects such as in the creation of penicillin. In fact, mold illnesses are incredibly common and even more sadly, they have significant detrimental impacts on the lives of those that are susceptible.

I had been working for years to recover from my own chronic illness and yet had never really considered much about genetic susceptibility and its relationship to ones condition. I was aware that many suggest that there are genetic components involved, but I did not understand much beyond that. I had never thought much about HLA (human leukocyte antigen).

HLA genes code various proteins on the outer portion of cells. The immune system uses HLA to determine the difference between "self" and "non-self". HLA is involved in the steps responsible for antibody formation. These genes have been associated with an inability of the body to recover from illnesses resulting from Lyme disease, molds, and other sources. In the event that a person has a susceptible genotype, the body does not recognize the toxins as a foreign invader and this, they are allowed to remain in the body. This causes long-term and perpetual ill-health. It has been asserted that nearly 100% of people that become ill after exposure to a biotoxin can be shown to have a predisposition to that biotoxin through the HLA-DR genotype. Many of us have bodies that simply do not recognize the presence of these toxic substances and thus do nothing to eliminate them. Dr. Shoemaker uses the terms "Lyme susceptible" or "mold susceptible" or "multi-susceptible" to categorize one's HLA genotype.

HLA testing is done through LabCorp and can provide some interesting explanations for why we often remain ill. In my case, I presented with a 4-3-53 genotype which is multi-susceptible and is also termed the "dreaded genotype" by some. It means that your body is not capable of dealing with toxins from many origins including Lyme disease and mold exposure. It is not my belief that the genetic results imply that you cannot or will not recover. However, I do think that they provide another piece of information to help us understand and adapt treatment protocols to provide us with the best possible chances of recovering.

I had purchased the book Mold Warriors and had it sitting on my shelf for many months. Then, in the course of about one week, several people through my web site mentioned the book. I decided that there must be a reason that I was now supposed to read it. I found the book to be an entirely different perspective on Lyme disease and mold-illness than what I had ever really understood in the past. It was not my position that my previous understanding or treatment approach was incorrect, but that maybe I could understand more of the puzzle by looking at things in this new way. I may then be able to integrate some of these new theories into my treatment regimen and, as a result, take my health to the next level.

In Lyme disease and certainly mold illnesses, the biotoxins themselves are a major component of the resulting symptom picture. Most Lyme-literate doctors will agree that the toxins which are produced from Lyme disease are likely the reason that most people continue to feel quite ill.  In genetically susceptible individuals, these toxins are excreted by the gallbladder and then almost entirely reabsorbed by the remainder of the digestive system. They continue to circulate in the body with no mechanism for removal and can continue to recirculate for years.

The symptoms of mold illnesses include:
If you look closely at the symptoms of mold-related illness, they overlap very closely with those experienced by people with Lyme disease. Thus, symptoms may actually be more related to the biotoxins that are present in either condition than to a specific organism or toxin itself.

One testing mechanism that Ritchie C. Shoemaker, MD utilizes is called the VCS (visual contrast sensitivity) test. This test can be done online or in a doctors office and measures exposure to biotoxins. It does not matter whether the toxin came from mold, Lyme disease or other sources such as algae, dinoflagellates, or other spirochetes. The test may be a useful indicator for diagnosis and treatment of biotoxin-mediated illness. I have taken the test about half a dozen times and it can be done online at http://www.SurvivingMold.com. It is definitely worth consideration.

Dr. Shoemaker contends that people with mold-related biotoxin illness are not necessarily infected with a mold or fungus, but that they are exposed to the spores that these produce which are highly toxic. When biotoxin illness is confirmed, Dr. Shoemaker often uses a combination treatment of Cholestyramine (CSM) and Actos, along with a low amylose diet. CSM works by removing the toxins that have entered the body. Though it should still be a key goal to avoid the toxin-producing substances in the first place, CSM can help to bind to the toxins already in the body and shuttle them out of the system. A low amylose diet is an extremely important part of the treatment protocol, as it helps to minimize (along with the Actos) the pro-inflammatory cytokines, which are often elevated in individuals with biotoxin induced illnesses. Further information on the role of CSM, Actos and a low Amylose diet, go here.

Next comes Dr. Shoemaker's "Biotoxin Pathway". This helps to explain all of the downstream effects of these toxins in someone that is genetically susceptible to biotoxin illness. It is quite complicated and warrants significant additional study. I highly recommend you read the book and understand the details behind it. Once you pick it up, I suspect you won't be able to put it down.

The “Biotoxin Pathway” shows the cascade of events that starts a biotoxin illness in those who are HLA-susceptible the moment that they are exposed to a biotoxin. It leads to increased leptin, increased cytokines, increased MMP-9 (MMP-9 is a global measure of cytokine activity in the body), reduced VEGF, and reduced MSH (alpha-melanocyte stimulating hormone). Reduced MSH leads to reduced ADH (antidiuretic hormone), reduced sex hormones, changes in cortisol and ACTH (adrenocorticotropic hormone), prolonged illness, resistant staphylococci infections, gastrointestinal problems, chronic pain, and sleep disturbances. All of these are downstream effects of a biotoxin in an HLA-susceptible individual. It is mind-boggling to try and comprehend the magnitude of negative impacts on so many body systems caused by a biotoxin.

You can find a Lab Order Sheet and a Draw Sheet with expected ranges online. For more information on this area, visit Dr. Shoemaker's web site at http://www.SurvivingMold.com.

I've written three articles in the Public Health Alert related to Dr. Shoemaker's work. They can be found here:

UPDATES: In December 2010, Dr. Shoemaker released his latest book.  It is one that I have been waiting to read for quite some time.  Not only did he release his new book, but he created a very informative new web site.  Several things have changed in both testing and treatment from the earlier Mold Warriors book which was published in 2005.

In October 2011, I attended a two day lecture with Dr. Shoemaker which included all the latest information on topics such as TGFb1, C4a, ERMI, and much more.  My summary of this event can be found here.

MOLD TESTING: I have used a lab similar to Tennessee Mold Lab and CitriSafe for testing my home and office. You can order several testing plates via their web site and then after performing the collection, you can view the results online. Total cost for plates and results is about $80.  Unfortunately, I don't think the mold plates are nearly as telling or useful as the ERMI.  Dr. Shoemaker recommends the ERMI test from Mycometrics.

RECOMMENDATION: I personally recommend that anyone with chronic Lyme disease or other chronic illnesses have their HLA type tested and do the ERMI from Mycometrics.  The ERMI continues to shed light on complex situations.  If someone lives in a moldy environment, it is unlikely that they will ever get well.  Unfortunately, this seems a topic that most are unwilling to consider and thus their illnesses continue.  Note that some relatively new ERMI interpretation criteria have been made available here.

The topic of mold is one that is close to my heart.  After having run the Mycometrics ERMI testing, I was forced to move.  At the time, it all seemed overwhelming.  I had to leave behind mattresses, pillows, couches, and so much more.  And yet, today, I am grateful that I found that I had black mold in my living environment and left behind one more reason that my health was less than it could be.