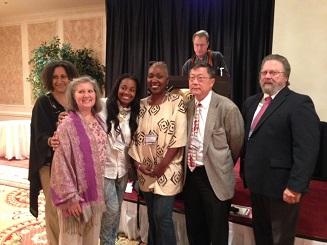 September 13-15, 2013 was the weekend that the 8th International Alternative Medicine Conference was hosted by Dr. Simon Yu MD in St. Louis, MO.

It was an enlightening event, and I am very happy to have attended.  The speakers were superb and included Dr. Dietrich Klinghardt, Dr. Hal Huggins, Dr. Steve Fry, Dr. Garry Gordon, and several other excellent doctors and practitioners.

I have met Dr. Yu in the past at other events and had read his book a couple of years ago.  It was an honor to learn more from him as I think he is another leading healer in the field.  No one person has all of the puzzle pieces, but I am confident that Dr. Yu has several of them.  His main areas of focus are on parasites, dental issues, heavy metals, and food allergies.  The various tools that he uses for identifying potential stressors resonated with me very strongly.  One of his primary tools is an EAV device that looks at stress or imbalance in the acupuncture meridians.  I blogged more about my personal consult with him here.

First, I highly suggest you do two things:

1) Sign up for Dr. Yu's newsletter and review the resources on his web site at http://www.PreventionAndHealing.com

2) Get the book "Accidental Cure" and consider the other factors that may be impacting your health.  It is a superb book that may open your eyes to an important but overlooked piece of your own personal journey.

Below is a summary of some of the highlights that I found the most striking from the event.  I do not intend to fully cover all of the lectures over the three days.  You can order any of the sessions in CD or DVD format from http://www.aurorarecording.com.  These are probably some of the best prices you will find on recorded presentations from some of the top healers in the world.  I attended the event and still ordered a couple of them to review again.

Simon Yu MD spoke on "Bio-Cybernetics and Energy Medicine: The Art of War on Cancer".

William Faber DO spoke on "Immediate Improvement of Pain and Disability Using Osteopathic Neural Fascial Principles". He spoke about neural therapy and also mentioned that taking parasite medications can be most effective around a full moon.

Dietrich Klinghardt MD delivered "The Toxic Metal Contaminated Terrain: Breeding Place for Pathogens and Parasites". It was one of my favorite talks from my primary mentor.

Steven Fry MD did two different lectures and spoke on "Metagenomic Approach to Oral Disease: How Next Generation Sequence Analysis Describes Complex Oral Pathology" and "Evidence of Biofilm Protozoans in the Human Vasculature".

Dr. Klinghardt spoke again on the final day as a replacement for another speaker who had to leave the event due to illness. For me, this was a great bonus!

Timothy Guilford MD spoke about "Glutathione: Cancer Therapy". I had the opportunity to have breakfast with him prior to the talk, and I continue to believe that glutathione is important for most of us. It helps the body with heavy metals, mycotoxins, and other detoxification support.

Paul Johnson is a chaplain that works with Dr. Yu.  He mentioned that our spiritual experience is about purpose, meaning, and hope.  He also shared that fear, guilt, shame, anger, and blame create toxicity in the body.

Simon Yu MD wrapped up this amazing event with "Energy Medicine on Parasites, Dental, and Cancer".