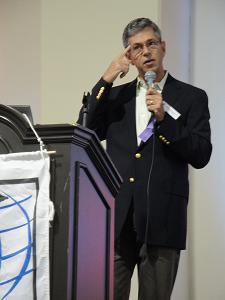 On Sunday, October 25, 2009, as part of the ILADS yearly Lyme disease conference, I attended a presentation by Dr. Joseph Burrascano MD, a leader in the treatment of Lyme disease. The topic was "Advanced Topics in Tick-Borne Illnesses". I was very interested in the information that he shared. In fact, I was "glued to the screen".

The first topic was "XMRV Virus". I've been watching the news on this with great interest in terms of the impact in the world of CFIDS. In talking with several doctors at the event and doing further reading on my own, I will not be at all surprised if this virus ends up being a part of the chronic Lyme picture.

Dr. Burrascano (Dr. B) noted that XMRV (xenotropic murine leukemia virus-related virus) is a retrovirus that has been found in patients with prostate cancer. It was more recently found in CFIDS patients by Judy Mikovits at a rate of about 2/3 of those tested. Healthy people tested positive at a prevalence of less than 4%. Other similar testing of CFIDS patients resulted in a positivity of 95% for XMRV. XMRV has been found in Fibromyalgia, MS, and autism as well.

Personal note: I already know of one chronic Lyme patient that was told to consider AZT (an HIV drug). Dr. B did state that it is likely premature to start using anti-retroviral drugs until more is known about this virus. I think it goes without saying that XMRV may become a player in chronic Lyme disease as well, but it's very early for much more speculation. I will likely get tested in the future.

Dr. B. shared that many scientists and doctors have speculated that a retrovirus may be involved for some time in the world of CFIDS. HIV is the other well-known retrovirus; it seems that XMRV is a much simpler retrovirus as compared to HIV. Thus far, transmission via blood, semen, and breast milk may be modes of infection. Other routes of transmission remain unknown. XMRV is immunosuppressive and persistent. It may play a role in Lyme disease, but whether it is causative or the result of something else is not known.

Borna virus is an RNA virus that was originally discovered in Germany. It is not known to be tick transmitted but via close person to person contact, via pregnancy, and via blood transfusion.

Borna virus is a brain infection. The good news is that it does not cause permanent damage once eradicated. About 30% of people tested are positive for latent Borna virus. The more stress a person is under, the more likely the virus will be found in an active form.

Amantadine is the drug of choice for Borna virus treatment. Dosage is generally started at 200mg per day and may be increased to 400mg per day after checking Amantadine blood levels. 12 weeks of treatment can often inactivate the virus if a patient has a functional immune system; longer or indefinite treatment may be required in those with immune-suppression.

In patients with a presentation of depression or bipolar disorders, Borna virus may be a factor.

Both Dr. Willy Burgdorfer and Dr. Eva Sapi have identified nematodes in ticks. It is thus possible that patients with chronic Lyme may also have nematode (worm) infections.

Dr. Lawrence Klapow has identified a lung worm called Cryptostrongylus pulmoni in up to 75% of patients with CFIDS. These worms may not present with expected high eosinophils or elevated IgE as they suppress the immune system. Fatigue and rashes are common complaints. The worms live primarily in the lungs and can be diagnosed by lung tissue biopsy or via sputum samples.

Another interesting comment that was made was that nematodes are known to contain viruses and we may someday find that viruses such as XMRV and others are within the nematodes that have been identified in ticks. More research is needed.

Dr. B. shared the latest on promising pharmaceutical agents for chronic Lyme disease. The latest is Tigecycline which is a minocycline-like drug only available as an IV.

Intracellular drug levels of many antibiotics are reduced by efflux pumps which often make the intracellular levels of the drug too low to have a beneficial effect. With Tigecycline, the efflux pump is inhibited which increases intracellular concentrations. Nausea can be extreme in some cases. Sun sensitivity is an issue and the drug cannot be given to children or pregnant adults. Dr. B commented that this may be the most effective drug for chronic Lyme disease.

While on Tigecycline, intracellular levels of drugs such as Biaxin, Zithromax, and Ketek may be increased and these may then be more effective.

Acidic environments inactivate antibiotics. Unfortunately, Lyme lives best in acidic areas of the body. It is thus true that it may also be helpful to consider Plaquenil or Amantadine to alkalinize the body as another mechanism for making these antibiotic therapies more beneficial.

In patients with potential infection with Borna virus, Tigecycline plus Amantadine may be a powerful combination.

The discussion on IV led to further talk of Bicillin. At a dose of 1.2 million units 3-4 times a week, this may be as effective as IV therapy. Even at this dose, this is a relatively low dose of antibiotics but the sustained presence of the drug in the body adds to the effectiveness. In some patients, Bicillin is better than IV therapy. Injecting the drug over a 2 minute time period is suggested.

Dr. B has found Bicillin to be useful during pregnancy and with a combination of Bicillin and Zithromax, he has not had any ill babies since he began using this approach in 1991.

Several discussions at the conference suggested that IVIG may be highly beneficial in repairing damage to small nerve fibers. IVIG may be indicated in patients with neuropathies. Skin biopsies are needed to determine if the damage is present. When present, symptoms may include orthostasis (blood pressure related problems), air hunger, and GI problems due to autonomic dysfunction.

For very ill patients with Borrelia where Ceftriaxone has failed and the patient has Bartonella (or BLO) and possibly Mycoplasma, Tigecycline plus Amantadine with optionally adding Metronidazole or Tinidazole may be helpful.

Dr. B. gave the group a number of "Clinical Pearls". He shared the following:

Spending time at the ILADS event provides a sense of hope for the future. Brilliant minds are working together and collaborating on how to get patients well. It feels like we are getting closer...

Note: The information contained in this post is a subset of the detailed information presented at the event. It is not possible to relay all of the content of the talk but I hope to hit some key points that will be of interest to many of us with an interest in Lyme disease.

If any information contained in this post is deemed incorrect or is unclear, please Contact Me and I will make appropriate updates where necessary.