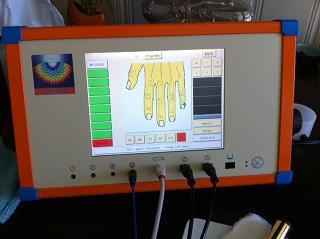 Given my interest in looking for all beneficial ways to improve health, I had a session this week on the CHIREN, a biophoton device invented by Johan Boswinkel. It is my true belief that light and energy is where the real treatments will emerge for improving our health.

The way I see the device at present is much like a combination of the ZYTO with a Bionic 880-like device. The CHIREN can detect imbalances and then correct them on an energetic level.

The experience is pleasant and consists of an EAV probe being used on different points on the fingers and toes to detect issues while holding a metal rod in one hand. For treatment, there are clear cylinders that are held and clear foot plates that you put your feet on. Other than the sensation of a mild flow of energy, I didn't feel too much during or after the session. Some people can feel fatigued after a session.

Some of the bigger issues that Bowsinkel believes impact health are whiplashes which cause an energetic disconnect between the head and the rest of the body and something called Electron Spin Inversion. I think that in people that have ESI, treatment with the device to correct this issue may be quite helpful. I did not have ESI according to the CHIREN but I was treated for the whiplash. In the case of my practitioner, the whiplash treatment is always done whether or not there was a known issue.

The primary findings of the session were consistent with previous suggestions from other tools or practitioners. There was some energetic stress related to Lyme and Babesia that were found in my nervous system as well as weaknesses in my stomach, small intestine, and large intestine. The GI weakness made a lot of sense given that my acupuncturist has told me the same thing many times.

When I initially scheduled my session, I was told that it takes at least 3 sessions to really see if it will be beneficial and thus I plan to continue for at least two additional sessions in the next couple of weeks. I will update this blog entry with additional information as I learn more.

A series of videos by Johan Boswinkel and the CHIREN can be found here.

To learn more about Biontology, visit their web site here.

Update - 2nd Session on 8/21/2012 - The primary items that came up during my second session were: vaccines, mild inflammation of the appendix, gallbladder, Bartonella, CMV, thyroid, and electron spin inversion (this did not come up in the first session). I plan to do another session next week and will see what comes up then. I can't say yet whether or not I feel that the CHIREN is making any positive shifts, but I will continue with it further in order to get a clearer picture of its potential benefits.

Update - 3rd Session on 9/11/2012 - I took a break from the CHIREN as I was having a significant inflammatory flare from GcMAF and didn't want to push my body too hard. In this session, I did not show any electron spin inversion. The primary findings were malaria-like organisms in the meninges (likely Babesia) and Chlamydia pneumoniae in the lungs. Appendix was still showing as having minor inflammation. I'm still not certain whether or not the CHIREN is providing any clear results, but I am planning a couple more sessions. The one interesting thing was during session #2, I was having much worse inflammation and it seemed like several more things showed up than in session #1. It was like I was a different person. In session #3, things looked much better. I interpret this to suggest that when the body is inflamed and overloaded, the entire system is impacted and weakened. A focus on reducing the inflammation, detoxifying, and taking a break from the GcMAF seems to have made a difference as evidence from how different session #2 and #3 were.

Update - 4th Session on 10/6/12 - Today, malaria (Babesia) showed up in the nervous system. Some large intestine stress related to the appendix was present. Still had some stress in the lungs and minor drops on gallbladder, liver, spleen, and pancreas. Support was provided for the thymus and thyroid as well. The practitioner reported notable progress from my first visit. I'm still not able to report any observable changes, but I am planning to continue as I do believe that balancing out the stressed organs and glands only further optimizes the overall organism (body).

Update - 5th Session on 10/14/12 - Liver needed support today. Malaria/Babesia were no longer causing a drop. Previous lung pathogen was no longer causing a drop. Toxoplasmosis and Leptospirosis balanced drops identified in the stomach and large intestine. Did a neutralization session on my GcMAF injections hoping that this makes future injections less likely to cause inflammation. Tonsils were testing all clear. No Lyme observed. Overall much better balanced on the CHIREN. Since my eyes are one of my remaining issues, we created a remedy of Veratrum which should support the eyes.

Update - 6th Session on 10/21/12 - Appendicitis, tonsils, small intestine, calcium in the arteries, and aluminum came up. We did a treatment with "blue belly lizard". We balanced the Luesinum miasm.

Update - 7th Session on 10/27/12 - Have had a cold this week. Picked up sinus, tonsils, Lyme in connective tissue at low level, Bartonella in nervous system at low level, staph, calcium buildup in arteries, lymphatics, and thyroid. Overall, the practitioner suggested that I am testing far more balanced than when we started. While I haven't seen any major shifts, I do think the CHIREN is a useful supportive tool.

Final Note: After 7 sessions on the Chiren, I was unable to identify any specific physical changes and decided to put further sessions on hold. I have received several emails from people with excellent stories of results on the Chiren, increasing CD57, and other very strong results, but I personally did not see any notable results. Like everything, some treatments are the exact right thing for one person and do little for another. I'm still very open to the Chiren and think that if people have a good practitioner using it, it is worth exploring, but at this point, I'm not planning to do further sessions at this time.

I'd love to hear more of your personal experiences with the CHIREN. Please Contact Me.