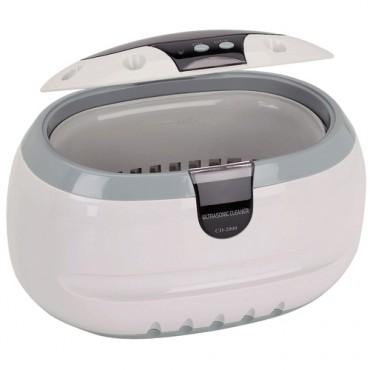 On page 10 of part 2 of my article on the LIA 2010 Conference, I mentioned the "Klinghardt Lyme Cocktail". This is a combination of ingredients that many people have used with success in dealing with both microbial and toxicity issues as part of their treatment protocol.

The recipe for the KLC blends the main ingredients with Lipo Health (now LipoSorb or LipoWell) to make the final compound liposomal. It is believed that liposomal products are absorbed and utilized by the body much better than non-liposomal formulations. Several benefits of liposomal products are described here. Many different products have emerged over the years such as liposomal Vitamin C, liposomal Glutathione, and others.

Until now, some have made their own liposomal compounds using a blender and a liquid form of phosphatidylcholine.

Recently, a natural health consultant shared the Brooks Bradley Method of liposomal encapsulation technology with me. In this method, an ultrasonic cleaner is used (after initially mixing ingredients with a blender for 5 minutes is complete) to encapsulate compounds in a phospholipid membrane. On this same site, it is speculated that "liposomes could more easily assault and penetrate many forms of infective biofilms resulting in a very effective delivery system against these pathological forms." Given the known issue with biofilms in chronic conditions such as Lyme disease, this statement certainly caught my attention.

At a recent conference, Dr. Klinghardt suggested that using an ultrasonic device such as that discussed here may be a very useful tool in helping to optimize the effects of the cocktail.

I'd welcome any feedback or personal experiences that people care to share on this topic.

Disclaimer: Attempting to make your own liposomal preparations is something that should only be done in conjunction with your doctor or medical professional. Doing this incorrectly or with the wrong ingredients may be detrimental to your health. Liposomal products are similar in their effectiveness to IV. Intense Herxheimer reactions may be experienced. It is important to ensure the purity of any substances being used in a liposomal preparation.

Always consult with your doctor.